This post was originally published a year ago, but as a secret post for a small group of people doing a private ritual. I was thinking recently about how our society lacks cultural spaces and traditions for descending into the primeival, and how disconnected with nature we all have become. So I’m re-posting and deleting all the private information in order to put another crack in the wall of Civilization. If someone actually does a ritual in the woods based on this post, then I did something right.

This an orgiastic Night of Pan ritual, with dancing to rattles and pan flutes, invoking Pan with a Pan invocation, and drinking a cauldron Pan brew. You’ll know that the rite was a success if by its end the the sun is coming up and you have forgotten how to speak.

This is mostly drawn from a Sabbat rite recommended by Aion 131, and it is in the excellent tome, The Book of the Horned One: A Gate of Pan Magick.

Amongst the group of people, choose a person who will be a symbolic focal point for the Horned One, a living avatar. This person should be dressed/masked accordingly and will have a slightly different function than all the rest.

What each person will need to bring:

As a group, the following is needed:

It’s good to meet in the woods. Don’t do this out in the open. Go somewhere you have to walk to, that will be away from the public eye. The more wild the better. Many cities have their secret woodsy spots if you are forced to stay within the city limits, otherwise get out of town. Try not to attract attention, but don’t be afraid. Fear represses ritual. 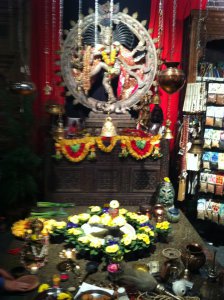 This was at the old Traveler’s store location on Pike Street. For me there is a strong connection between Shiva and Pan.

Once you get to your location, begin by clearing the space and setting up your altar.

1. Chakra chants can be used to get in our bodies. We’re looking to embody certain forms of consciousness, and to do that you need to disembody, but to do that it’s good to be in your body first. Check out the chakra tones and an explanation here. For more info about the person behind this website, connect with Orryelle Defenestrate Bascule.

2. Pranayama – Use a Pan Bija vibration of “Ha”. This “non-word” vibration is uttered NOT as a phoneme (i.e. not pronounced) but as the first exhalation of new life, the last exhalation of Death, and the release of Orgasm. Do this in circle for about 3-5 minutes and end with the traditional sign of silence (finger to lips)

Someone state the following, and allow short meditation to follow when everyone just stops and listen to the sounds of nature around them:

I supplicate and invoke
The spirit of the unseen lands
that we now walk upon
invisible of earth and sky and the immense regions below,
glory of the Ancient and Eternal

Hear us and
let these words echo above and below

We will share our blood and spirit with you
We will be kind and grateful to you,
Lords of the Land, be kind to us

With pan flute and rattle, call loudly to the four directions in the wilderness: IO PAN! WE CALL THEE
Then face the altar and make the following call. This one is from Gardner, it is a good one to memorize, and it is a traditional call and preliminary invocation to the Horned One:
Eko, eko, Azarak
Eko, eko, Zomelak
Bazabi lacha bachabe
Lamac cahi achababe
Karrellyos
Lamac lamac Bachalyas
Cabahagy sabalyos
Baryolos
Lagoz atha cabyolas
Samahac atha famolas
Hurrahya!

The celebrants begin to drum, play pipes, clap, and make any number of animal sounds: hooting, howling, hissing — calling forth their animal beings and atavistic selves as they proceed to the temple space. The Horned One leads them in a snake-like manner, and then in a spiral around the sacred stone, until all are forming a circle.

The music and non-verbal howling rises to a climax, and then all join in one joyous howl and become silent.

The Blessing and Invocation

All raise their hands up and receive the blessing from the infinite Heavens-Nature. Say

All lower their hands and touch the Earth, receiving the blessing from the great Earth. Say:

Intoning IO-PAN! the Horned One picks up hir stang, and using it draws the Pangil symbol above about the idol. S/he then stands behind the altar with arms and stang raised.

Incense is now lit, and the cauldron is set up before the altar, all the while chanting IO-PAN.

Follow with this invocation if you Will, Crowley’s Hymn to Pan. Memorizing lines of invocation is a good thing. A few decades ago, it was common for people to have memorized entire poems. In our modern day of looking-up everything via search engines, we have lost this power. Here is a video of this invocation and the words:

Thrill with lissome lust of the light,
O man! My man!
Come careering out of the night
Of Pan! Io Pan!
Io Pan! Io Pan! Come over the sea
From Sicily and from Arcady!
Roaming as Bacchus, with fauns and pards
And nymphs and satyrs for thy guards,
On a milk-white ass, come over the sea
To me, to me,
Come with Apollo in bridal dress
(Shepherdess and pythoness)
Come with Artemis, silken shod,
And wash thy white thigh, beautiful God,
In the moon of the woods, on the marble mount,
The dimpled dawn of the amber fount!
Dip the purple of passionate prayer
In the crimson shrine, the scarlet snare,
The soul that startles in eyes of blue
To watch thy wantonness weeping through
The tangled grove, the gnarled bole
Of the living tree that is spirit and soul
And body and brain — come over the sea,
(Io Pan! Io Pan!)
Devil or god, to me, to me,
My man! my man!
Come with trumpets sounding shrill
Over the hill!
Come with drums low muttering
From the spring!
Come with flute and come with pipe!
Am I not ripe?
I, who wait and writhe and wrestle
With air that hath no boughs to nestle
My body, weary of empty clasp,
Strong as a lion and sharp as an asp —
Come, O come!
I am numb
With the lonely lust of devildom.
Thrust the sword through the galling fetter,
All-devourer, all-begetter;
Give me the sign of the Open Eye,
And the token erect of thorny thigh,
And the word of madness and mystery,
O Pan! Io Pan!
Io Pan! Io Pan Pan! Pan Pan! Pan,
I am a man:
Do as thou wilt, as a great god can,
O Pan! Io Pan!
Io Pan! Io Pan Pan! I am awake
In the grip of the snake.
The eagle slashes with beak and claw;
The gods withdraw:
The great beasts come, Io Pan! I am borne
To death on the horn
Of the Unicorn.
I am Pan! Io Pan! Io Pan Pan! Pan!
I am thy mate, I am thy man,
Goat of thy flock, I am gold, I am god,
Flesh to thy bone, flower to thy rod.
With hoofs of steel I race on the rocks
Through solstice stubborn to equinox.
And I rave; and I rape and I rip and I rend
Everlasting, world without end,
Mannikin, maiden, Maenad, man,
In the might of Pan.
Io Pan! Io Pan Pan! Pan! Io Pan!

This should be recited very lustfully with interruptions of howling, wild drinking of wine, clapping and stomping and swaying and dancing!

One by one or in two’s, the celebrants now approach the Pan Linga, strip off their robes as much as they’re comfortable, and anoint themselves with the potent sacred flying oil/unguent, calling upon the Horned God/dess as they Will, asking for Pan to come into their lives and all the details that might entail. The Linga may be kissed.

The Horned One then circles the whole congregation clockwise, riding the stang like a horse, and the celebrants follow in a raucous flight/dance. Some may choose to simply play the drums, pipes, and so on, others may choose to do wild gyrations or assume the form of animals. There is no song, but shouts of IO PAN or IO AN or HA and wild howling.

The Horned One raises his/her arms with the stang raised high and all Halt, fall the ground, and center their power on the cauldron and the stang.

Slowly and with great focus, the Stang is placed in the cauldron, and the Sacred Union of the positive and negative, Yin and Yang, is made – an explosion of incandescent energy ripples out and all participate in this cosmic orgasm in silence.

The stang is set into the ground where the Horned One stood (behind the Lingam) and becomes the Icon of the Horned God for the next part of the rite. The Horned One takes off hir horns, places them on the altar (perhaps on the Beast idol), and joins the celebrants.

Everyone drinks from the cauldron, the Eucharist of Pan. Later, portions may be bottled up for the individual uses of the group’s participants.

Afterwards, the celebrants should embrace the earth. This is the time for the liberated expression of sexuality, animalism, the libido, one’s natural state. Afterwards, everyone may go up to the idol and kiss it and charge the feast with howls and chants of Io-Pan!

A joyous feast ensues, as the celebrants wish. The contents of the cauldron are finished in roundtable fashion. all east and drink, play music, be merry, be glad to be alive, LIVE LIVE LIVE!!!

As things settle down, there is time for meditations, divinations, magicks, spells, and such. It is up to everyone individually.

When the Sabbat is done, all gather and as one offer (unlit) incense, drink, fruit/food and flowers to the ground by the altar, and raise hands to the sky saying “To Nu NUIT!) and to the Earth saying “To Gaia GAII!” and to the idol of the Horned One saying “EN TO PAN! IO PAN! IO AN! HA!”

Someone takes the stang, all follow and spiral out from the altar, counter clockwise, saying goodbye, playing pipes and rums slowly, quietly, letting the energy spiral out and up and down, feeding nature, whispering, IO PAN IO PAN IO PAN

At the outer edge, all turn outward and offer the energy to the joy of all beings:

And then everyone gambols off.

Most of ritual text comes from The Book of the Horned One, with various and significant additions and edits. If you have enjoyed this text, strongly consider buying this book and supporting the work of the author, Aion 131.